Tucker Carlson: Sort of Right About Venezuela, Wrong About Davos 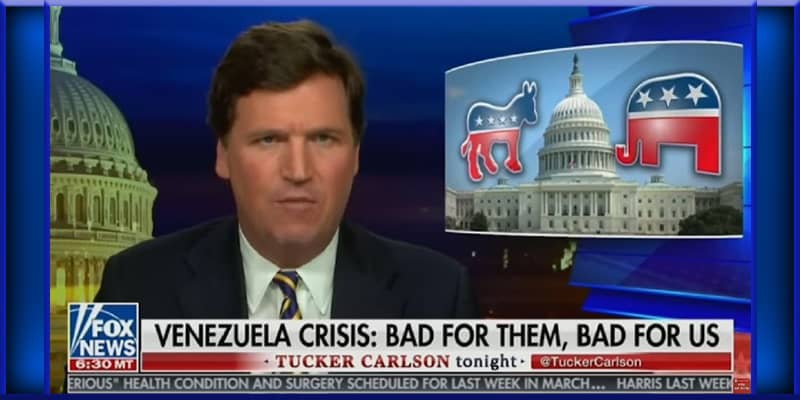 (BSDMS) – Tucker was right that these sanctions tactics by the U.S. have almost never worked out well in the past. Tucker talks about that while there may be horrible dictators out there, it’s preferable to the chaos that replaces them. He points out examples such as Libya, that now has open slave trade markets, and this is after the U.S. got involved. Libya used to be the cut off point for migration into Europe, but now since U.S. involvement it has opened its doors and is the gateway for migration into Europe. Syria isn’t better off either, neither is Venezuela since U.S. sanctions. A Brooking’s Institute report indicates that a Venezuela crisis could create upwards of eight million refugees, more than created by the Syrian civil war.

When the U.S. imposes sanctions on countries and it leads to bankrupting the country, its people become desperate in poverty and feel buried, in dire straits, are starving, and can’t get the medical care they need, that’s how riots are incited, violence erupts, there are uprisings, and it has been responsible for leader’s literally getting their heads cut off. This is what the U.S. is trying to do in Venezuela with continuing and increasing sanctions, to make the country become chaotic. In this way, it is intended to lead to the people overthrowing their government themselves rather than the U.S. having to use military intervention.

As a result of U.S. sanctions and then the U.S. military intervening, U.S. troops have never left Syria, Iraq, Afghanistan, or Korea for some examples. “Permanent obligations to solve temporary problems,” is U.S. foreign policy in a nutshell.

Tucker began a segment on his show with demonizing socialism and blaming it on the collapse of Venezuela, but that’s part of what millionaire Fox News anchors get paid by billionaires to do, demonize socialism. Socialism had nothing to do with the collapse of Venezuela, socialism does not collapse economies. However, what does cause economic collapse is a lack of democracy, and especially when being heavily sanctioned by the U.S. The U.S. intervened with sanctions, their people are not better off and are starving, the U.S. did that, the U.S. starved them to death, not their government or socialism.

Venezuela became bankrupt and collapsed because they were unable to market their crude oil and fuel, and unable to profit from it, this, and U.S. sanctions included, caused the country to be shut out. It was recently reported by Reuters that Venezuela’s crude oil and fuel exports have dropped by 40% under U.S. sanctions. The collapse of Venezuela is the result of a U.S. led economic war, and in 2019 the U.S. also targeted the country’s food program which is relied on by millions of its people. The U.S. media ignores these facts, while also wrongfully applauding that it’s all the government of Venezuela’s fault. The Trump administration is currently making efforts to impose additional sanctions on Venezuela, to keep the country in its chaos. The U.S. has been trying to topple Venezuela for the past 17 years.

Tucker Carlson is wrong about Davos

Dutch Historian Rutger Bregman who confronted Davos billionaires over tax avoidance had recently clashed with Tucker Carlson in a leaked UN-aired Tucker segment. The TV host was so riled by Bregman that Tucker began insulting Bregman by telling him things such as “You’re a moron,” and “Go F**K yourself.”

Bregman accused Tucker Carlson of faking being against the elite. He also said that Tucker is bought by the Murdoch family and Cato Institute, which is a right-wing think-tank Carlson was involved with until 2015. Bregman said Tucker takes “dirty money” from the institute, which is largely funded by the Koch brothers, and it opposes higher taxes on the rich.

Bregman is right when he was saying billionaires are not paying their fair share of taxes, while at the Davos World Economic Forum in Switzerland. Bregman addressed the key issue in the battle for greater equality, that rich people are failing to pay their fair share of taxes, something Tucker Carlson has ignored, or said the opposite. Tucker only started to talk about the issue during that segment because Bregman brought it up.

A majority of Americans support proposals to increase taxes on the rich, and Tucker Carlson should not be ignoring that fact.

Of course we want a foreign policy in the U.S. that protects our own people, but we should also not want foreign policy that destroys other nations. A majority of those in power in Washington D.C. have learned nothing from past failures. Sanctions are sort of like boycotting, but on an international or world stage. You see a company is in the wrong or has done bad things, and you decide to boycott it, if the boycott is big enough and lasts long enough, that company may go out of business, “close its doors”, and file bankruptcy. It’s the same concept with U.S. sanctions in that it can make things worse for the boycotted or sanctioned target, even leading to a complete collapse and failure of that business or country.

Don’t get me started on how retail powerhouses such as Amazon, Walmart, and somewhat ebay are directly impacting retailer business failures and closings.

You can watch the leaked UN-aired Tucker Segment uploaded by NowThisNews on YouTube: