(BSDMS) – UNITED STATES – There are many good reasons why people are turning to support Senator Bernie Sanders (I-VT) for President in 2020. Although it is still too early to know for sure, his campaign has been picking up a front-runner amount of support. After yesterday’s hire of Briahna Joy Gray as his National Press Secretary, the Sanders 2020 campaign leadership now boasts 70% women. This is historic among presidential campaigns. Here are 8 more Reasons People Support Bernie Sanders

Senator Sanders makes it loud and clear that he has an appeal for citizens who feel the whole democratic system has broken down and isn’t what it should be. Bernie Sanders represents the interests of the people and not elections that have been bought and paid for by corporations and special interests.

Such elections have wreaked havoc on the environment, caused financial crises, and have used it to line their pockets for-profit filled agendas which marginalize the needs of the people even further.

2. Other candidates are seen as “more of the same”

Senator Sanders is seen as someone with a vision people can get behind, something different, and not more of the same old ideas. Bernie is one of only a small group of real progressives in Congress who does not accept donations from corporations or special interests, etc. and instead he only accepts donations from individuals.

People are tired of the rich getting richer, working harder to earn less, and college education that does not do what it promises while leaving students with massive loan debt.

3. Bernie Sanders is consistently judged as a virtue and trustworthy.

Many presidential and congressional candidates have “flip-flopped” on their policy views during election campaigns, but Sen. Sanders has been consistent with his ideas, views, policies, and his vision for the country, etc.

He is seen as someone who will uphold his campaign promises and follow through with them, rather than how other candidates in the past have quickly changed their views after taking their congressional or presidential positions. Sanders has been consistent in voting for Democratic-backed legislation in congress.

4. The people’s demand for revolutionary change

Other 2020 candidates have and will continue to paint Sanders’ pitch to U.S. citizens as unrealistic, but people are exhausted with these small incremental changes. Hillary Clinton painted Sanders this way during the 2016 election.

Bernie Sanders is the only candidate who means it when he claims he is standing up for the middle class and poor people. Bernie wants Medicare for all, so be wary of candidates who pitch healthcare ideas that are not medicare for all.

5. It’s too late for baby steps

What other candidates dismiss as being unrealistic, Sanders supporters see his views as the last chance to save America. Sanders will follow through with solving ideas such as income inequality, a national $15 minimum wage, holding Wall Street accountable, criminal justice reform, Medicare for all, and fighting climate change. Bernie truly has a progressive agenda, and many feel that now is the time to implement it.

6. Climate change is a global threat

There is an urgent need for change, and one of the main issues is fighting climate change. Bernie supporting see sanders as one of the only candidates prepared to do something about it. This would be done by massively increasing the usage of alternative energy sources and clean energy in this country.

7. It isn’t only about Millennials

There is a wide range of Sanders supporters, from teenagers to the elderly, and everyone else in-between. Bernie is popular all across the age spectrum.

There is some frustration over the U.S. system and the generations of leaders who are not making substantial and meaningful changes. People are tired of having to choose to vote for “the lesser of two evils” in elections. People want a candidate who does not just “talk the talk”, but also “walk the walk”.

In conclusion, and how Bernie Sanders will implement his plans, or pay for it all

There are some other candidates in the 2020 presidential race who actually endorsed Hillary Clinton in 2016, but now all of a sudden are using Bernie Sanders’ proposal ideas. However, Sanders can be taken at his word, he has a long-standing reputation of being trustworthy and honest about what he says, with consistency.

Bernie is not just “giving away free stuff”, here is an image describing how Bernie Sanders will pay for his proposals: 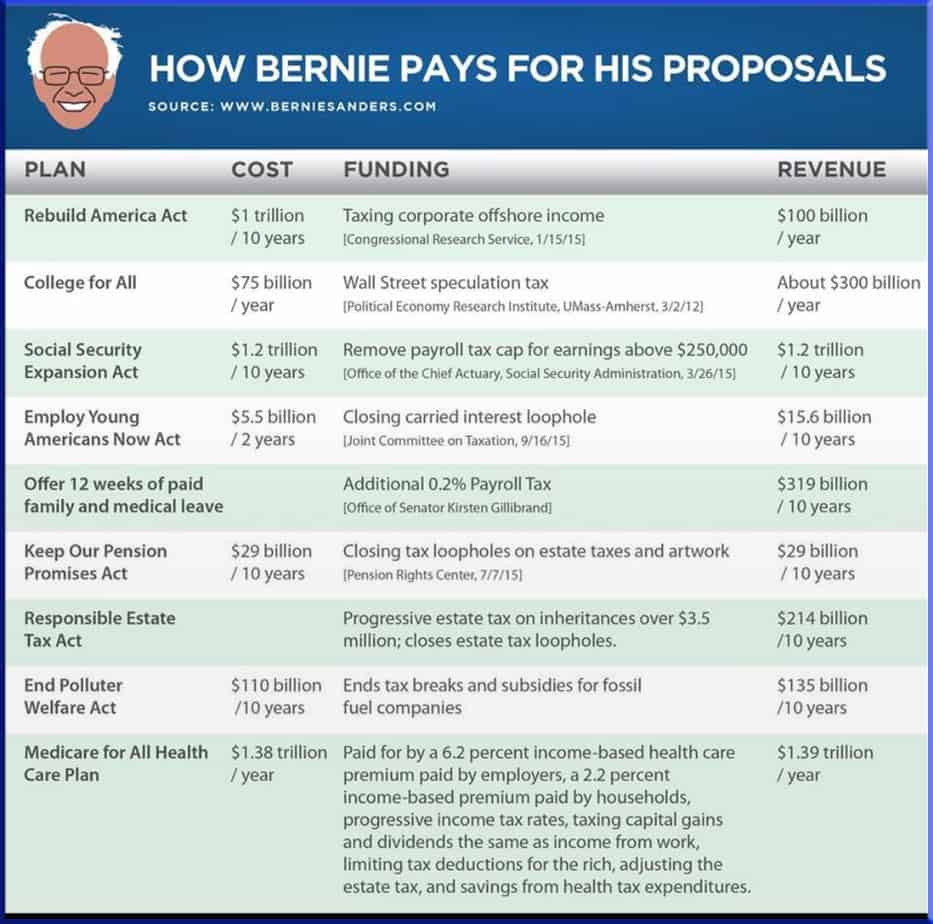